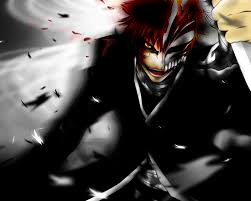 We run down the streets to Urahara’s shop. We occasionally after look like we completely don’t know the naked person running alongside us, or we just smile awkwardly and say, “Don’t mind him!” But thankfully, what with a storm beginning to start, there aren’t very many people out. I just hope no one calls the police…

We arrive at Urahara’s shop within a couple of minutes. Kisuke Urahara is an ex-soul reaper that runs a store for soul reapers in this world. He’s always been a good friend; in fact, he’s taught me much of the basics of being a soul reaper, and even more. I wouldn’t be the warrior or the person I am today if not for Kisuke. And he always seems to have an answer for everything. Although he can be both a perv and a lying scumbag, he’s a pretty good guy. And we trust him.

Urahara’s shop is in the center of a desolate, discrete lot between two buildings that dwarf the store. We approach the front of the building, and then I turn to the other me and say, “You just wait outside for a moment. Don’t go anywhere.”

“No kidding!” I say, turning back towards the shop.

Rukia and I open the door to the store and walk in. From the looks of the interior of the shop, you couldn’t really even guess what Kiskue and his crew sell. Boxes are piled in one area, and some items are set out in a store-like fashion. Everything is swept nice and clean, although I wouldn’t use those words to describe the store as a whole. “Hey Kiskue!” Rukia calls.

At the end of the room, a sliding door opens and Kiskue enters the room, gently waving a fan by his face as he approaches. His clogs clap as he walks. I believe he’s what you would call a “hippy”. “Is that the voice of my favorite member of the Kuchiki clan?” he asks in his cool voice. He peeks up at us from under the brow of his white and green hat. “What can I do for you two today?” His two employees, Jinta-a bratty boy who looks like he’s eleven-and Ururu-a timid girl with two big pony-tails of about the same age-both follow him.

“We have a few questions to ask you about this guy we found,” I say.

I frown, “Maybe you should have Ururu leave…”

Suddenly the door of the shop slams open. The other me stands there. “Geez, I told you to be quick,” he says. “I’m freezing up out here!”

Everyone calms down after a moment. Kiskue squints, growing pensive and lowering his head, and he states, “It would appear that that’s the least of the problem.”

The other me scowls, staring at Kiskue. “I know you,” he says. “Your name is Kiskue Urahara.”

“That’s right,” Kiskue smiles. “I’m flattered to hear that you know me. But I think the question we’re all begging to ask is-” he raises his head and looks intently at the other me, “-who are you?”

The other me pauses, as if unsure how to answer. “I’m,” he starts. His eyes flick to me for a moment, and I feel like I know what he wants to say. The words form on his lips, but he doesn’t allow himself to speak them. He clenches his fists and averts his gaze, stating through his teeth, “I don’t know!”

“Well then,” says Kiskue, raising a finger, “why don’t we start with the first thing you can remember?”

The other me thinks, and then says, “I remember lying on a cold, metal table. There was somebody standing next to me, but I couldn’t see all of him. He was holding a syringe. There was blood all over my face. Then I was taken to a cell.”

“And how long ago did all this happen?” Urahara asks.

We all gasp. Five days ago? That can’t be! “You mean you’re only five days old?” I question, incredulous.

“I’m telling you,” the other me says, frustrated, “that’s all I know! I don’t remember anything before that!”

“Well then,” Kiskue says, his voice becoming grave, “why doesn’t Miss Kuchiki here tell us about the report she got from the Soul Society.”

Rukia grunts, growing stern like Urahara, and she says, “We believe that someone in Hueco Mundo has created a new form of life. Members of the Stealth and Punishment Force have been investigating it, but as of now, we still aren’t certain.” Rukia glances at the other me, “Do you know if you were in Hueco Mundo.”

“Hueco Mundo,” the other me says under his breath, as if trying to remember. He raises his head after a moment, declaring, “Yes, that’s where I was.”

“Then I think that settles it,” Rukia says. “The new form of life is a clone.”

Sorry it took so long for me to post the next chapter.  Things have been kind of crazy with The Golden Lands (TGL).  If you guys like my writing, I really think you’ll enjoy my, free, downloadable self-published work: The Golden Lands, Volume 1: Shadows in the Sunlight.    Also, if you have any questions about Bleach, TGL, or me, please feel free to comment or contact me!