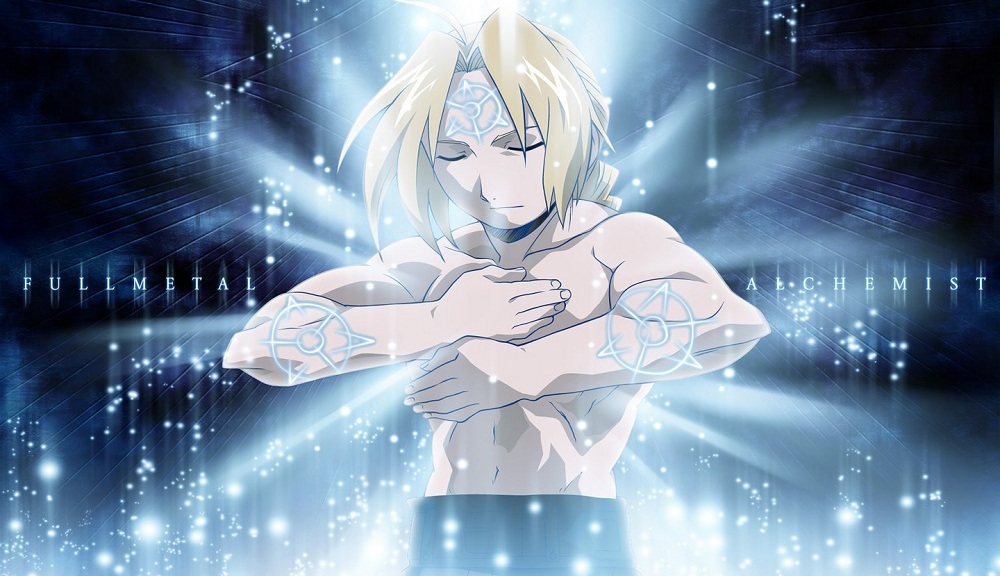 Note: this will contain LOTS of spoilers.  And if you already know the story of FMA, feel free to skip to the section entitled “The Truth”.

Fullmetal Alchemist, created by Hiromu Arakawa, is a great manga and anime for a few reasons:

1. Great character development. It’s hard not to feel for the characters in all of their struggles, hopes, triumphs, and defeats.

2. An exciting, elaborate plot, filled with complicated military strategies and rebellion, as well as a world of magic that could present a plot twist at any moment.

On that last remark of reason #3, we find why so many people appreciate Fullmetal Alchemist. It’s so philosophical in a way that touches the hearts of its viewers, encouraging and even enjoining them to contemplate the actions or principles of the main characters.

Hiromu Arakawa has created both a world and a group of characters that take on moral dilemmas and complex, ethically-blurry situations from a philosophical dimension. One of the most prominent philosophical themes/questions that Fullmetal Alchemist focuses on is that of Equivalent Exchange, or rather, as it is called most officially, “The Law of Equivalent Exchange”.

Alchemy and the Law of Equivalent Exchange

In other words, the three basic actions are Comprehension, Deconstruction and Reconstruction.

However, there are two “laws” that apply to alchemy, and ultimately to Equivalent Exchange. One of them is the Law of Mass Conservation, a law that exists in the real world, outside of the universe created by Arakawa. The Law of Mass Conservation, as it applies to alchemy, means that the amount of matter going into the transmutation will equal the amount of matter once the transmutation is finished. The second is the Law of Natural Providence, which means that if you are transmuting something made of steel, you can only produce something with the characteristics similar to steel; for instance, you couldn’t transmute steel and create water.

In order to obtain something, something of equal value must be lost.

For instance, a transmutation cannot be performed if no matter is placed within the transmutation circle; the circle must be “given” the matter it will transform.

The Law of Equivalent Exchange relates directly to alchemy; it is seemingly a scientific principle of the alchemical arts. However, in Fullmetal Alchemist, Edward and Alphonse (Ed and Al) take Equivalent Exchange further and (in a most philosophical manner) seek to apply it as a moral code: a principle to be followed in the face of every complexity and endeavor a person could work through and towards. Thus, Equivalent Exchange is applied to actions. Many would agree that, perhaps, this “law” certainly makes sense. Equivalent Exchange technically states that if you want something, you need to put in the necessary amount of effort to get what you want.

The Taboo and the Quest

Ed and Al fail to apply the Law of Equivalent Exchange when they try to resurrect their mother. At this point in their lives, Ed and Al are only children, and–having been abandoned by their father–their mother meant everything to them. After their mother dies, the brothers begin studying alchemy in earnest in order to learn how to perform a Human Transmutation. However, Human Transmutation is strictly forbidden by every alchemical authority; it is impossible to accomplish, and extremely dangerous. You cannot resurrect someone from the dead.

Ed and Al are reckless, however. They will try to bring back their mother no matter what. They gather every elemental component of the human body, and then each of them contribute a drop of blood. Thus, the brothers believe that they themselves will lose nothing as a result of Equivalent Exchange; they have provided the means to make a body (via the elemental components), and their drops of blood are for creating their mother’s soul.

Try as they might, two drops of blood don’t equal the value of a human soul. The transmutation fails, and Edward’s leg is taken from him as Equivalent Exchange tries to make up for creating a human soul. Alphonse loses his entire person. Shocked by their failure, Edward quickly sacrifices his arm and manages to bring back Alphonse’s soul and bind it to a suit of armor. It would seem like, after the transmutation, Edward and Alphonse have given so much to resurrect their mother. Surely they have given enough to bring her back.

Unfortunately, they are rewarded with a creature that isn’t even human.

The plot of Fullmetal Alchemist then becomes Ed and Al searching for ways to fix their bodies. Ed has vowed to return Al’s soul to his body, and Ed would also like to get his arm and leg back. Both of them understand that fixing their bodies will require another Human Transmutation. But, egged-on by stories of the legendary Philosopher’s Stone, a super alchemical-amplifier, they believe that returning to their bodies is still possible. Ed and Al still believe that if they sacrifice enough, if they try hard enough and put enough effort into their quest, they will be rewarded in the end.

The anime Fullmetal Alchemist displays Ed and Al’s quest not only as an adventure, but a search to discover the truth–the truth about alchemy and the Law of Equivalent Exchange. Ed and Al have religiously believed in the laws of alchemy, and especially in Equivalent Exchange. As stated previously, the brothers believe that if they give enough effort to their quest, they will succeed in the end. According to the Elrics, that’s how life works; if you persevere and work hard, it will pay off. It’s Equivalent Exchange.

The truth about Equivalent Exchange finally comes to light when Ed confronts Dante, the main antagonist of Fullmetal Alchemist. Dante is a powerful alchemist that has survived for centuries, using the power of the Philosopher’s Stone to transport her soul into a new body each time she starts growing old. However, as Ed points out, every time she “jumps” bodies, she loses a part of herself through Equivalent Exchange. As a result, her soul can’t remain in the bodies she uses for very long.

But then Dante replies: Equivalence? Don’t tell me you still believe in that naive theory.

And the following discussion ensues…

Ed: It’s no theory! It’s the absolute law of alchemy! No, of the whole world! To obtain anything, something of equal value must be lost. You couldn’t have gotten anywhere without knowing that.

Dante: A beautiful story, told to the oppressed and to make children do their lessons. The truth is, the Law of Equivalent Exchange is a lie.

Dante: “To gain, something of equal value must be lost”; conversely, if you give something up you will always gain a prize of equal worth in return.

Ed: Exactly. That’s why people work hard at anything they do, because it pays off.

Dante: Consider the State Alchemy exam, which you passed with flying colors. How many others took the test that day, spent months, years preparing, some working much harder than you, but you were the only one who passed? Where was their reward? Was it their fault that they lacked your natural talent?

(Later in conversation) Dante: People can say there’s a balance, a logic that everything happens for a reason, but the truth is far less designed. No matter how hard you work, when you die, you die. Some spend their lives trying to scratch their way to the top, but still live in poverty, while others are born into wealth without ever working at all. It’s a cruel and random world, and yet the chaos is all so beautiful.

And their debate ends there. Ed doesn’t seem entirely convinced with Dante’s reasoning. But he’s obviously discouraged, able to think of no reply to Dante. He can see the truth in her words. No argument is needed to reaffirm Dante’s words. Equivalent Exchange, it seems, has been proven wrong.

An episode later, Edward is once again told that Equivalent Exchange isn’t real, this time by his own father, Hoenheim. Hoenheim leaves without giving Edward an opportunity to argue, but as Ed watches his father leaves, we hear his thoughts, cast out to Hoenheim and the audience.

Ed: I can’t agree with you. I know that if I try my hardest, I’ll be rewarded, and I believe that applies to all of us. It doesn’t matter who you are. If you work hard, it pays off. I know Equivalent Exchange is true.

And, as if he can hear Ed’s thoughts, Hoenheim replies mentally: But this world…

When it comes to dying in the 2003-2004 Fullmetal Alchemist, things can get a little complicated. In order to complete this discussion, I need to lay out, in an orderly fashion, what happens:

Edward should’ve died. Having sacrificed himself for Alphonse, and having no alternate-self to go to once beyond the Gate of Truth, it is seemingly impossible for Ed to survive. But then he finds himself back in London, as himself, with his father once again. And Edward is, rightfully so, confused. Why did he survive? He traded a life for a life. Why is he still alive?

It is Ed’s father, who, having rebuffed the notion of Equivalent Exchange earlier, provides an answer for Edward.

You boys had a long journey. All the people you helped along the way, all the hardships, the pain of losing friends you loved, the determination, sweat, blood…don’t you think that might’ve been the price you paid?

And so it seems that, in the end, Equivalent Exchange really came through for Edward after all.

Is Equivalent Exchange real? Reasonably speaking, no. Unfortunately, the world just doesn’t work that way. However, it is definitely good when we are able to work for something, and be rewarded in the end. Perhaps it is straight-up idealism, and perhaps belief in Equivalent Exchange is childish, but it is a “law” to be respected, and in some cases, encouraged. To believe in Equivalent Exchange requires faith…even if you’re an agnostic, science-loving, 4’11 alchemist!

I guess I don’t really have an answer.  What do you think?