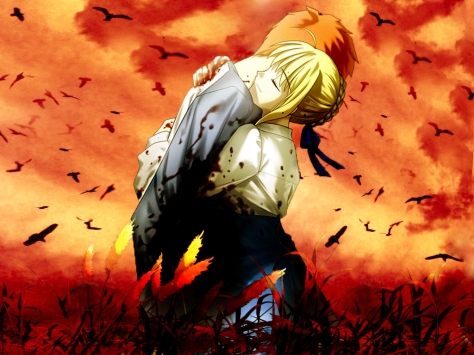 I’m not usually going to comment whenever I post a “Why We Love Anime”, but this picture deserves some attention.

First of all, I love this image.   It beautifully depicts what love looks like.  You can see how both Emiya (the boy) and Saber (the girl) are giving of themselves to each other.  Emiya is obviously giving himself entirely to Saber; he doesn’t even have the strength to stand.  His lifeless body is falling into her.  And she’s receiving him.  Both of them are covered in Emiya’s blood, embracing each other through the blood.  Love exists even through the pain.  That’s exactly how love between a man and a woman should like.

And look at the scenery around them.  What’s flying around in the sky? Crows.  Maybe vultures.  Either way, both of those birds are symbols for evil and death.  But look at Saber’s face.  Even though they are seemingly surrounded by evil, the sky dark and the world decaying around them, they are both at peace.  Because they’re holding each other, and real love exists between them.

I don’t know who drew this, but I tip my hat to you!

This is just another reason as to Why We Love Anime!